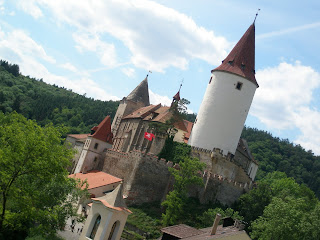 Devin (pronounced "Deh-veen") sits atop a rock formation where the Danube and Morava rivers converge. The castle remained relatively intact until Napoleon's army blew it up in 1809 (the reasons for which are unclear). Devin is about a 5 minute drive from Bratislava, Slovakia. Links: Wikipedia History Info with Aerial Satellite view
3 comments
Read more Okor (pronounced "Oh-kozh") is about 30 minutes from Prague by car. I found it particularly remarkable that it was built not on a high, defensive area - like most castles - but on a small hill that barely rises from a small valley surrounded by farmland. This from a Czech Castles blog : "The Okor village is first mentioned in 1228 as a property of St George Monastery in Prague Castle (klášter sv. Jiří na Pražském hradě). A Gothic castle was built here in 1359 by a wealthy burgher of Prague's Old Town Frantisek Rokycansky, what was quite unusual in those times, when most castles were built by noblemen." Links: Short Video Tour (from Prague.tv) Hotel Okor Okor Open-Air Music Festival
1 comment
Read more Spissky Hrad (pronounced "Speesh-skee"), according to historians, dates in various forms back to the Neolithic Period . Located between Poprad and Presov , it offers a 360 degree panorama of the surrounding valleys and distant mountains. These photos were taken on a dismal day in September, 2007, while returning from visits to Michalovce , Kosice , and the Andy Warhol Museum in Medzilaborce (near the Poland border). Links: Spissky Hrad Official Site UNESCO historical evaluation
Post a Comment
Read more

JASON MASHAK
Self-exiled from the USA, I write/edit in Central Europe.